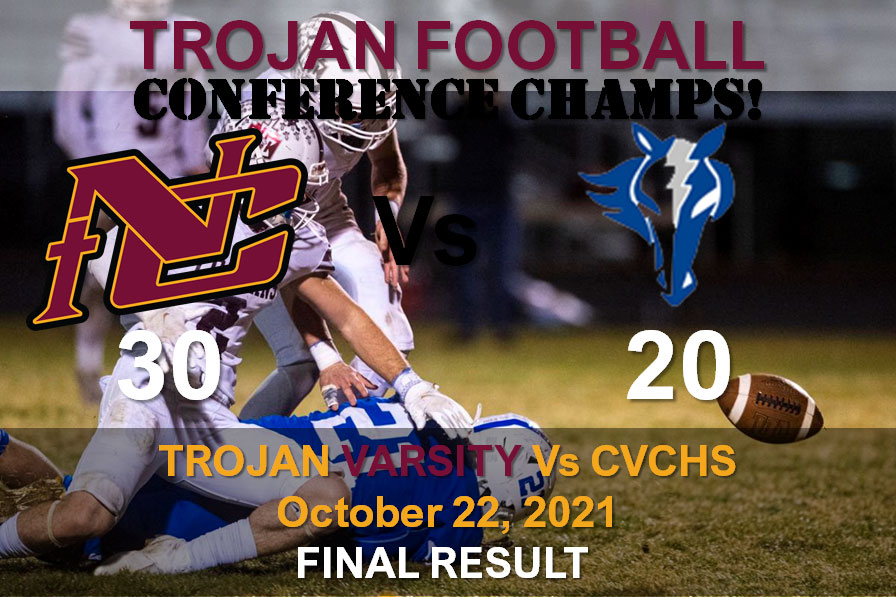 The Nampa Christian Trojans are the 2021 Western Idaho Conference Football Champions! Trojan Football took the Western Idaho Conference Title last night. In a game that became the 2021 Conference Title match up, our Trojans needed to not lose by more than 14 to earn the crown. After a back and forth battle, the Trojans pulled away early in the 4th quarter to grab the Conference Title and a 30-20 win over conference rival Cole Valley Christian. Columbia High School field was wet, the ball was wet, the players were wet and the rain came down hard at times. We expected to see the ball on the ground a lot but despite the conditions, neither team fumbled the ball away.

This is the first conference title for Nampa Christian since the 2015, When All State Quarterback, #9 Steve Tiersma, led the Trojans into the semi-finals at Nampa Christian. Not only was there a Tiersma on that team, there was a Bradshaw, too.

Winning the Conference Title gives the Trojans a first round bye next Friday as the 2A Idaho State Football Tournament kicks off. We will keep you updated on the brackets as playoff action unfolds.

Congratulations to our 2021 Western Idaho Football Champs, The Nampa Christian Trojans, to Coach Jenkins and his outstanding coaching staff and to the Trojan Nation. Celebrations in order!