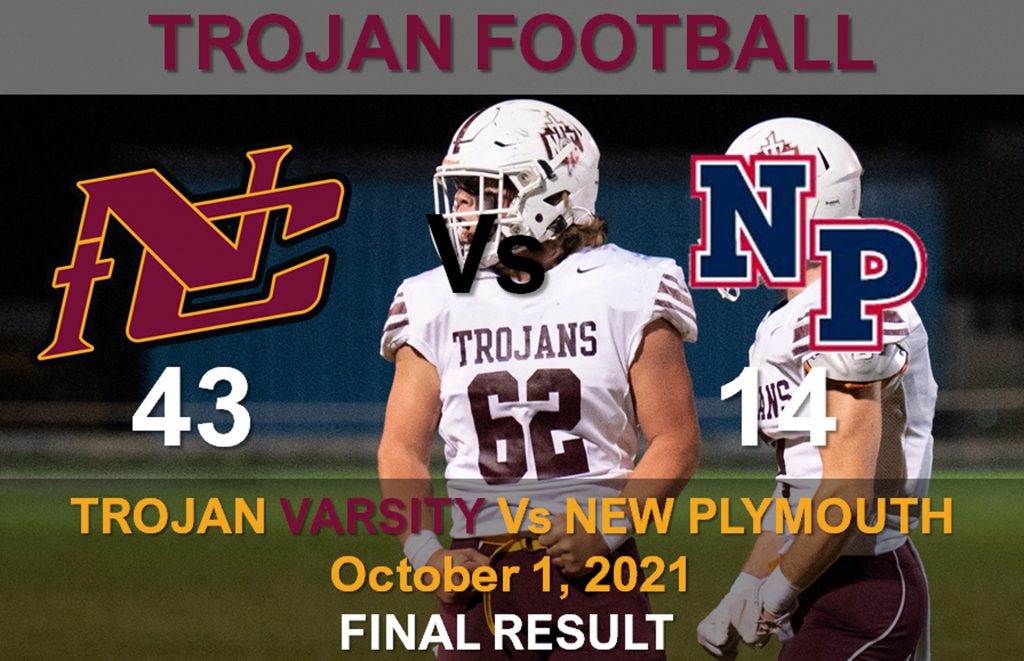 This is a big Trojan Win. Head Football Coach Daniel Jenkins made it clear just how big this win is as he faced the Trojan fans as the game ended and yelled up his positive feelings about the win. Coach Jenks is right to honor his boys as the win marks the first for the Trojans against NP since the 2015 season. And what a win it is, setting the Trojans at 5-1 on the season, the best record in the Western Idaho Conference and tied for the second best record in the Idaho 2A Classification.

Let’s talk defense. At the half, the Trojans were up 29-0. The Pilgrims scored on their first two drives in the second half. On the “Grims third drive, Senior Linebacker #62 Geoffrey Williams unleashed the biggest defensive hit of his career, deflating the Pilgrims team completely and re energizing the Trojan defense who held the Pilgrims scoreless throughout the rest of the game.

On the night, Williams had 6 tackles, including one for loss. Senior #3 Josh Tiersma Tiersma had 5 solo tackles and 5 assists, Sophomore standout #21 Addsion Taylor had 4 solos and an assist. The d-line contributed with a gap stuffing performance that saw 10+ tackles among the linemen. Leading that gap stuffing effort was Senior #79 Gabe Bowlin. Leading all Trojan defenders, Senior #4 Caleb Johnson who had 13 solo tackles, 3 for a loss and 9 assists. Wow.

Celebrate. Enjoy this moment, Trojan Nation. The Trojans took down the Pilgrims! Now join us on the road to Declo this Friday night.