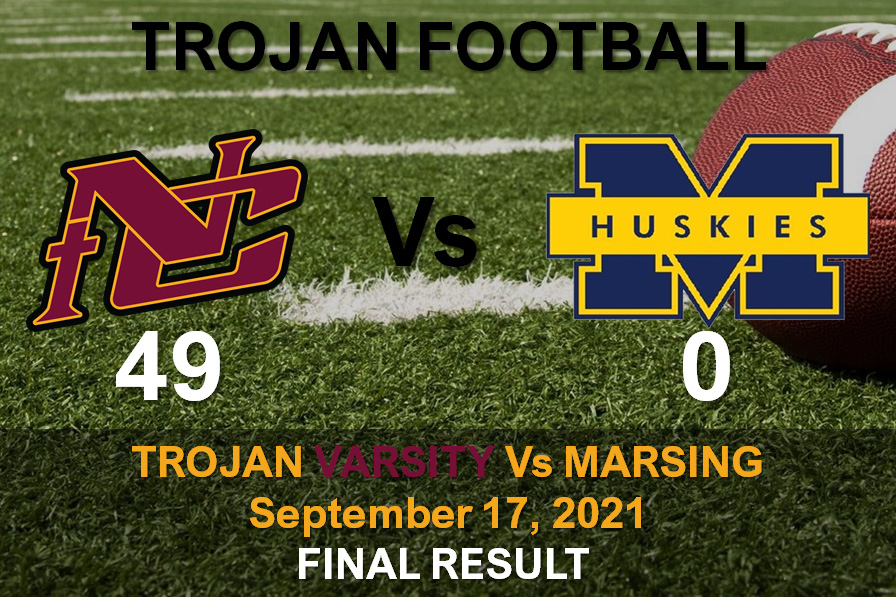 At Campbell field on Friday, 9-17-21, the Trojans hung 49 on Marsing in a shut out The Trojan defense held Marsing to just 75 yards in 58 plays from scrimmage. The Trojan offense put up 390 total yards from scrimmage., including 144 passing yards and 246 rushing yards.

The win puts the Trojans on Top of the conference at 1-0. See Conference Standings, here.They should be ranked in or near the Top 5 in state in Coaches Poll which comes out Tuesday and the Media Poll which comes our Wednesday. See current polls, here.

Watch a replay of the complete game, here.

The Trojans host Valley High School in a non-conference 2A match up for Homecoming on Friday, 9-24-21. The Trojans will enter play 3-1 on the season while Valley will enter the game 0-4.

The game between Nampa Christian and Valley will be live streamed on NCSTrojanLife.com. The JV kick off and coverage will start at 5:00 PM and run only two quarters. The Varsity pregame will start at 6:45 with the kick off slated for 7:00 PM. We will also have live coverage of the Homecoming Ceremony and Coronation, here. Caleb Johnson In The Open Field Against Marsing Coach Johnson With The Nampa Chritian Trojan Kick Off Team. Meluken Knudsen Kicks Off To Marsing Trojans Through The Tunnel For The Marsing Conference Opener