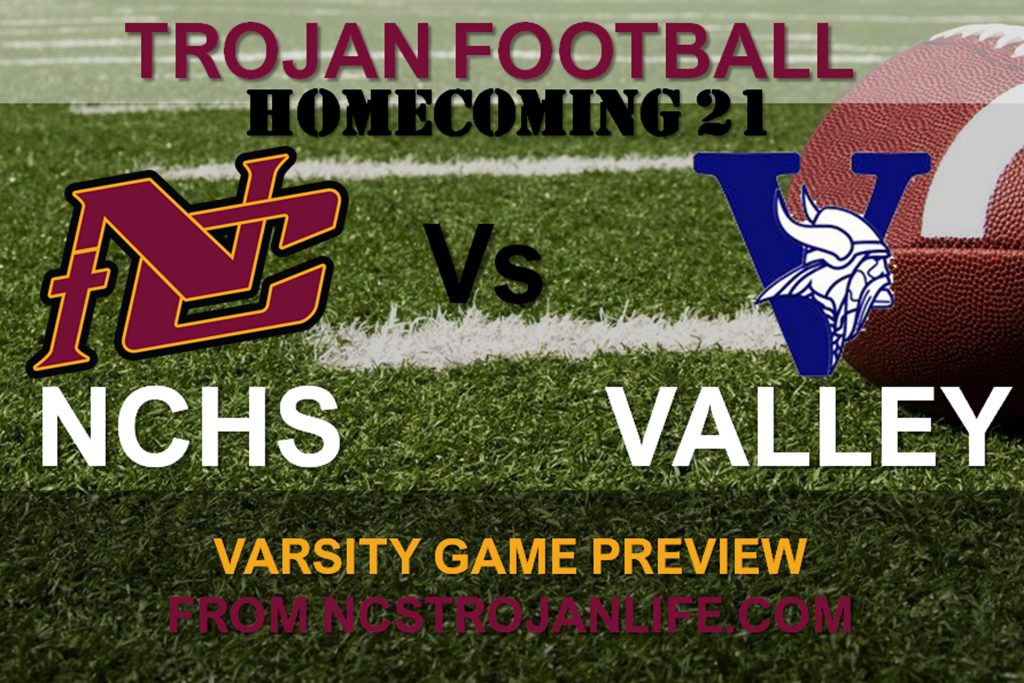 Game five on the season for the Trojans and for the Vikings has Nampa Christian coming in 3-1 with three blow out wins against 2A Wendell, 3A Parma and conference rival Marsing. The Trojan’s only loss is to 3A powerhouse, Fruitland. Valley has lost all four of their games this season, losing to 2A Marsing 6-48, 3A Filer 0-70, 2A Ririe 0-44, and 2A Melba 0-74.

Idahosports.com coaches polls has neither team ranked, but both polls have Nampa Christian unranked but receiving votes. The idahosports.com power rankings, a very suspect metric for ranking teams, has Nampa Christian ranked 4th out of 21 and Valley ranked last in the 21st spot for 2A football.

Through four games, Nampa Christian has scored 148 points while giving up 65 points. Valley has scored just 6 points, giving up a whopping 236. The 6 points scored by Valley came in their season opener against Marsing on a 62 yard kick off return.

Offensively, the Vikings rely on their 5’10” 145 senior running back and receiver, #31 Jeremy Hardy. Look for the Vikings to use Hardy on the edges and as one of two featured receivers…The Other being 5’7″ 145 pound sophomore running back Aaron Damian. Aaron Damian is the younger brother of 5’6″ 190 pound junior quarterback #11 Alan Damian. We expect most of the offensive yards to come from the arm of Alan Damian and the legs of Jeremy Hardy.

For the Trojans, Senior #5 Landon Cheney will be at the helm, using his legs and arm to propel the Trojan offense. The running game will highlight #1 Dane Bradshaw and #4 Caleb Johnson in addition to carries on the option and scrambles by Cheney, look for the senior speedster junior #3 Muluken Knudsen on end-arounds.

When Landon puts the ball up, he has a lot of excellent targets to connect with. Senior Josh Tiersma with lots of yards after catch. Senior #9 Simon de jong a reliable target anywhere on the field and juniors #3 Muluken Knudsen and the emerging #6 Trevin McConnell. The only area of concern so far this season has been the pass protection for Cheney. Once again, we should see a lot of scoring potential for our Trojans.

Valley has given up an average of 59 points per game, giving up 74 last week to NCHS conference rival Melba in a shut out. The D line is small so the vikings tend to go with 5 up front. Their DBs are quick, unsure tacklers who can be slow to react. As a team, Valley applies pressure with their 5 man front which has been problematic for the Trojan o-line against larger D-lines, like Fruitland’s, but not so much so with smaller D-lines, like Valley’s.

The Trojans, defensively, played well against a much improved Wendell team, struggled with the wing option offense at Fruitland, held the Parma offense to a shut out until the last play of the game and shut out conference rival Marsing last week. The Trojans were very consistent last week against Marsing… Consistent hitting and gang tackling out of their 3-3-5 stack helped stifle Marsing throughout the game. The Trojans should have nearly a full roster tonight, with the exceptions of junior defensive back Devon McDaniel and senior lineman Cody Greentree.

This should be a fun night for the Trojans and the Trojan nation. After this one, the Trojans have big games for the rest of the season: New Plymouth at home next week … A conference team the Trojans have not beat since the 2015 campaign, followed by a non conference tilt with 2A powerhouse Declo at Declo, and big conference games with Melba at NCHS and Cole Valley Christian away. No doubt coach Jenkins and his staff will have the Trojans ready to play with hopes to use this game to build confidence as they look to the heart of their season.

We are looking forward to the homecoming match up and ceremony from Campbell Field, live at NCSTrojanLife.com.