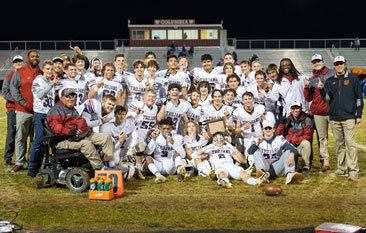 Trojan Football earned a first round bye and home field for their opening state playoff game, in two weeks. The team tallied an 8-1 regular season record. A one loss season hadn’t been accomplished by a Trojan team since the 2011 campaign. This was the first Conference Title for the Trojans since the 2015 Campaign when the Trojans finished 3rd in the state.

The Trojans will play, a first round winner. First round games are to be played based on current MaxPreps seeding. 2A Idaho football seeding is unique. The 5 conference champions earn automatic seeds and first round “byes”. Four conference titles have been settled, the three team, Central Idaho League, will be settled next week between Grangeville and St. Maries.

Teams who did not win their conference will earn first round games based on their MaxPreps (MaxMess) ranking due out this Monday…Tuesday…whenever. These are the likely teams and pairings next week: