28-20 TAKE DOWN OF DECLO IN TROJAN FOOTBALL STATEMENT WIN 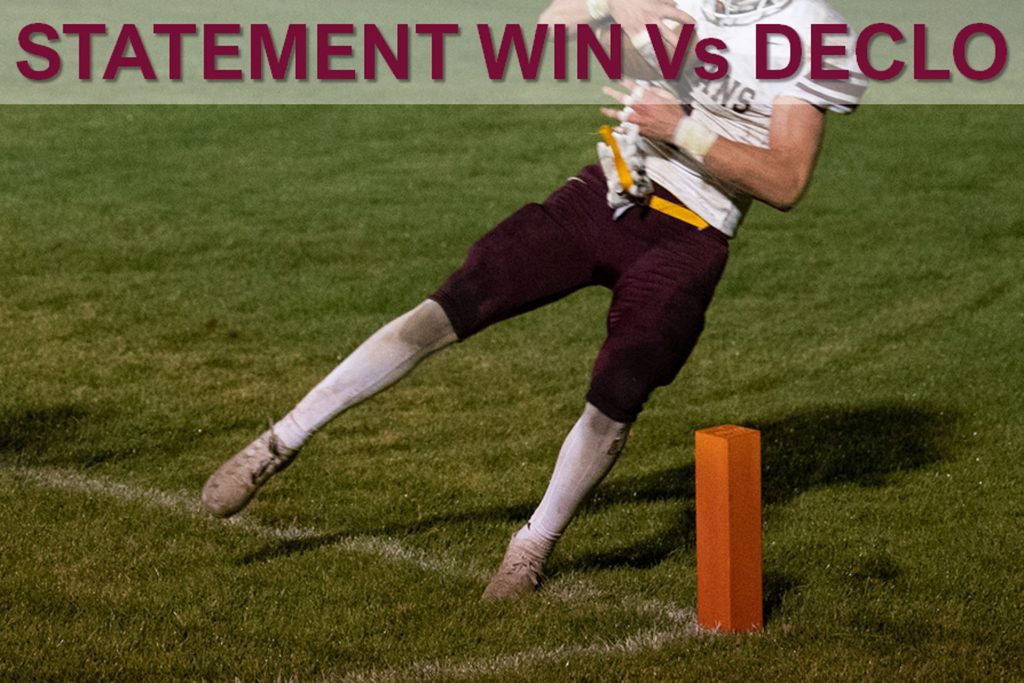 The Nampa Christian Trojan defense dominated the Declo offense, handing the Hornets the second of two back-to-back home losses and that has not happened at Declo in at least a decade. In fact, the Trojan defense held the hornets to just one touch down from scrimmage, forced Declo into 6 turnovers on downs. While the Trojan offense lit the hornets up for 244 passing yards and nearly 100 rushing yards. That’s a Statement performance by the Nampa Christian Trojan Football team.

From the opening drives for each team, Declo began to feel that this was a different Trojan team that the Hornets thought they were prepared for. On the opening kick off drive, the Hornets earned themselves a first and goal at the Trojan 3. At that decisive point, early in the game, The Hornets began to understand that this Trojan defense is not the one they dismantled at Campbell field a season ago. On four consecutive plays, from the Trojan three, the Trojans line, with Bowlin, Greentree and help from Pearson, stuffed inside runs and the Trojan defensive backs, with Taylor, Bradshaw, Cheney and Johnson, stuffed the edges. Result? Declo turns the ball over on downs at Trojan two. That was just the first of six four and outs the Trojan defense engineered against the often hyped Hornet offense.

The Trojan’s first drive, started at their own two after the Declo turnover on downs and ending five plays, ninety eight yards and six points later. The Trojans scored again on a long pass from Cheney to go up[ 12-0 early in the second quarter when Declo’s Keegan Ramsey collected a 65 yard pic six and a 65 yard kick off return. With a 2 point PAT, Declo led 14-12 at the half.

Declo opened their only touchdown drive from scrimmage on their first possession of the second half to make the score 20-12. Keegan Ramsey left the game in the third with an apparent knee injury. We wished him well as he left the Trojan sideline where Trojan trainers from St. Lukes worked on the standout athlete. As he was carted off past the visitors bleachers, the Trojan Nation wished him well and Keegan gave us a wave and the best smile he could. The Trojans, however, never looked back.

Trailing by 8 at Declo going into the fourth, the Trojans brought the score to a 20-20 tie, largely on the arm of Cheney. They once again held the Hornets to four and out…setting up the game winning 65 yard drive that led to the Statement Catch of the last decade for the Trojans….Cheney to Bradshaw for 30 yards in the corner of the end zone and six, followed by Cheney sprinting in for the two point conversion. 28-20, Nampa Christian over Declo. With less than three minutes on the clock, the Trojans made their final Statement of the night, kicking off to Declo and forcing the Hornets to a third and long at the Declo 35 as time expired. Statement Drive, Statement Catch. Statement Stand. Statement Win!

Declo began to believe that they were about to be upset, hence their announcer indicating that Bradshaw was out of bounds when he caught the winning touchdown in the corner of the end zone and announced that, “this one should be reviewed”. Interesting announcement to make since there was no meeting of the officials to discuss the play, there is no “review” of football plays in Idaho Prep football, the play happened 60+ yards away and across the field from the announcers’ point of view. Unfortunately for Declo and their man in the booth, NCSTrojaLife.com photographer Mrs. Taylor just happened to snap a pic of the catch. Clearly, Bradshaw drug his left toe for about six inches before the end line and at the end line his toe remains on the ground, in the end zone … TOUCHDOWN TROJANS!

Coach Jenkins still believes that the Trojans have yet to play their best game. GO TROJANS!

The Trojans are now primed now for the showdown with Melba, this Friday October 15th at home for Senior Night. Get on out to that game … join Trojan Life and support the Trojan nation! NCSTrojanLife.com Live Stream, here.

MaxPreps Idaho 2A Rankings Used To Determine Playoff Seeding, here (a horroble tool to use in ranking teams as you’ll see when you visit the link)